recognising that collaboration between the competent authorities and the providers of ambulance services is necessary,

being determined for further collaboration in this field,

have agreed on the following:

The terms used in this Agreement shall mean the following:

“ambulance service” - out-patient health care services carried out by an ambulance crew concerning the initial diagnosis and treatment of life-threatening diseases, injuries and intoxication and, if necessary, for the transportation of a person requiring care to the nearest hospital capable of providing the necessary in-patient health care as well as the dispatch of ambulance crews and processing emergency calls;

“border” – the Latvian – Estonian state border, in accordance with the Agreement between the Republic of Latvia and the Republic of Estonia on the Renewal of the State Border of 20 March 1992 and its additional protocol;

This Agreement covers the collaboration among the competent authorities and the providers of ambulance services of the Parties with the intent of improving ambulance service accessibility within the border area.

The competent authorities, having the right to make direct contacts and conclude additional agreements under the terms of this Agreement, are following:

1. in the Republic of Estonia:

1.1. The Health Board of the Republic of Estonia (hereinafter – “The Health Board”) responsible for drawing up contracts with the owners of ambulance crews, executing payment for provided services and executing supervision over compliance with the requirements provided for health care providers;

2. in the Republic of Latvia:

1. For the purposes of this Agreement, in both the Republic of Estonia and the Republic of Latvia, the ambulance service commences with the dispatch of an ambulance crew by the competent authority of the respective country and terminates when an ambulance crew reaches the base of its permanent location or receives a new dispatching order from the competent authority of its country of origin. When providing the required health care service to a patient, the ambulance crew decides whether the patient can be released for further out-patient treatment at home, transported to the nearest adequate hospital or handing the patient over to the ambulance crew of the country where the event takes place.

3. When called, the respective competent authority is obliged to organize the provision of help in the same manner as in the case of the national requirement. If the prioritization of an ambulance dispatch is required, all cases have to be treated according to the same national rules.

6. The exact procedure of requesting and providing aid shall be governed by agreement between The Health Board, The Emergency Response Centre and The State Emergency Medical Service.

8. When being present in the country of the other Party:

11. The competent authorities ensure that ambulance crews are equipped according to the requirements and rules of their countries. This requirement also has to apply to the provision of an ambulance service in the territory of another country in accordance with this Agreement.

2. In cases where the average price, calculated in the way mentioned above does not cover real expenses, the authority responsible for ambulance service payment of that country provides the evidence needed to the corresponding authority of another country. Expenses will be counted on the basis of the actual expenses of the country that is providing aid. The exact procedure and practical arrangements needed for account setting shall be governed using the agreement between The Health Board and The Health Payment Centre.

3. The setting of accounts takes place between The Health Board and The Health Payment Centre. The accounting currency is Euros. The demanding Party compensates the offering Party for all direct expenses related to the ambulance service cost. Depending on the nature and the scope of a specific ambulance event, the Parties may come to a different agreement if such a necessity arises.

4. The demanding Party that has withdrawn the request for aid without any legally, economically or technically-based reasons concerning a specific event at that time compensates the offering Party the price of the service. The detailed procedure shall be described in the Agreement of the competent authorities of the Parties.

5. In cases where The Health Board and The Health Payment Centre have not agreed otherwise, expenses shall be compensated after submitting a reasoned invoice within sixty (60) days.

Article 6
Compensation for damages or injuries

1. Each Party shall renounce any claim of compensation on the other Party in cases of death, bodily injury or any other damage to the health and personal effects of the member of the ambulance crew, provided that such damage has occurred in the course of fulfilling duties deriving from this Agreement.

1. Any disputes that may occur in the process of the interpretation or execution of this Agreement which cannot be resolved by negotiation between the competent authorities shall be resolved between the Parties.

2. Any complaints of a medical nature or directly related to the provision of ambulance service submitted by the patient to the responsible surveillance authority of its country of origin, shall be dealt in collaboration with its respective authority in the country of the other Party in accordance with the provisions of its national laws and regulations and provisions of this Agreement. The detailed procedure shall be described in the agreement of the competent authorities of the Parties.

2. The Parties and the competent authorities may meet in order to discuss or review this Agreement as often as they find necessary.

1. This Agreement is concluded for an indefinite period of time and shall enter into force thirty (30) days after receipt of the last notification whereby the Parties have notified each other of the fulfilment of the internal legal procedures necessary for the entry into force of this Agreement.

3. This Agreement may be amended and supplemented by mutual written agreement of the Parties. The amendments and supplements shall enter into force in accordance with paragraph 1 of this Article.

4. The competent authorities of the Parties may conclude separate agreements to specify the circumstances of the implementation of this Agreement.

Signed in Valga, Estonia, on 24 September 2010 in three original copies each in Latvian, Estonian and English languages, all texts being equally authentic. In case of any divergence of interpretation, the English text shall prevail. 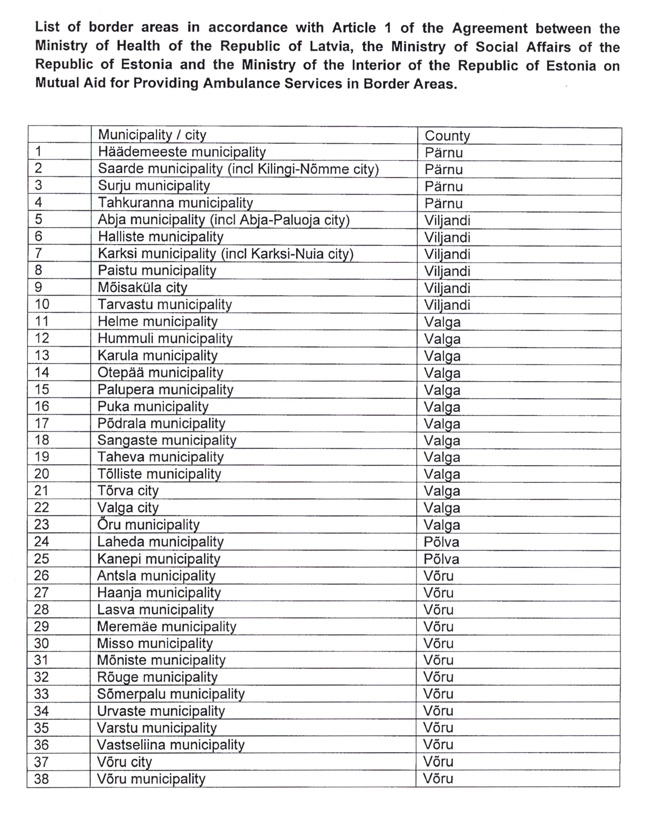